Dr. Ezequiel Parodi of University of North Carolina’s Division of Vascular Surgery, an expert in endovascular aortic interventions, joined staff at the Clinical Centre of Serbia Vascular Centre in repairing two patients’ aortic aneurysms. The Belgrade facility is a high-volume vascular center at the world’s third-largest hospital, treating two aneurysms per day. Attending surgeon Dr. Igor Končar was impressed that IOPS enabled manipulation of guidewires and catheters even without active radiation, commenting, “Using IOPS I released the fluoroscopy pedal and felt a sense of calm which I never had before, because for the first time I was navigating without hearing the pumps and sounds of the fluoro system.” Dr. Končar also was able to identify a possible new use for the system. “We cannulated the AAA contralateral limb on the first attempt with IOPS.” Both patients are doing well and the surgeons are pleased with the system. Dr. Parodi added, “This two-patient series truly shows the potential impact of the IOPS technology.” 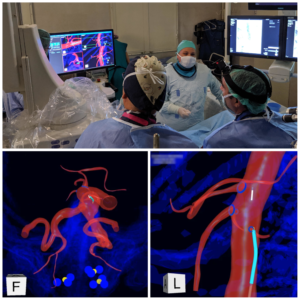 Quickly following the recent FDA clearance, this first-in-human use represents a key milestone towards broad commercialization, set to begin before the end of this year. “IOPS has all the key attributes to achieve the Triple Aim in healthcare – improved patient experience, improved health of populations, and reducing healthcare costs,” stated Philip Rackliffe, Centerline’s CEO. “The team has worked tirelessly to develop something that offers more than a stepwise improvement in care. The IOPS technology completely changes the game in endovascular procedures.” The present FDA clearance is for aortic interventions; the technology has significant patent protection and a robust lifecycle plan including structural heart and peripheral arterial interventions.

Dr. Matthew Eagleton, Chief of Vascular and Endovascular Surgery at Massachusetts General Hospital, will speak in detail about IOPS at the VEITHsymposium, a leading endovascular clinical meeting, in New York on Tuesday November 19th.